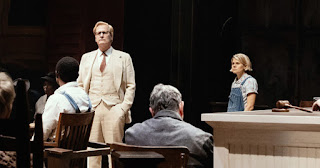 We were in New York for a few days, and the last evening - Tuesday night - we had tickets to see the new stage production of To Kill a Mockingbird.

Aaron Sorkin "written" - and manipulated by him and Harper Lee's estate. There were required changes - not that are so offensive, but you're toying with a classic.

The book had some humour built in - as the subject is heavy for its time period setting and its publication time, plus it's seen from a young girl's perspective.  The movie, while still having the perspective, I never found to be light. So I thought this adaptation was a little broad. The times the audience laughed and laughed were too numerous to count - and a little disconcerting to me.

Jeff Daniels was Atticus. Meh. While I know the play / book / movie is set in the South, his portrayal wasn't that convincing. He helped make Atticus a little sanitized. The Daniels / Sorkin thing was inevitable.  The woman who played Scout was the best in the play.

Gem, Scout and Dill were played by - and as - grown-ups. Well, to a degree. Boo Radley is there, but barely. Bob Ewell was well done too - and by a guy I've seen on every Law & Order franchise.....and as a racist cop on BlackKklansman.

All the expounding Atticus does isn't half as powerful as the scene with "town drunk" Dolphus Raymond. To me, he is the heart and conscious of the play.....and he's in it for five minutes of a 175 minute play.

Sorkin uses two things that bothered me - and probably only me. One was using the Latin phrase "Post Hoc Ergo Propter Hoc".  It stood out to me, as he used it in the West Wing. While it could be in the book, I don't remember it. Ever.  And he has Bob Ewell use it too.  Bob Ewell, who is never determined if he can actually read. He also accuses Atticus of having 'Hebraic blood".   Ewell would never know the word "Hebraic"

Deviations aside, the story is still poignant especially for our current time - one that I'm sure was not an accident on Sorkin's part. Or anyone participating in this production.

One hopes that anyone who buys a ticket would also find it poignant and timely.

And speaking of social injustices:   wine at the theater. I ordered one for each 710 and myself. No posted prices. I knew it would be "pricey" but had zero idea that I'd have to delay our retirement for five years.  After wine was poured and pushed across the bar, "that will be $54" !!!!

I know I'm a cheap drunk, but I don't buy $27 bottles of wine, let alone two of them. And trust in knowing, it didn't come close to two bottles of wine!

Celebrity sighting though:  Jeff Bezos was there. If anyone noticed other than I (who then told 710), no one seemed to acknowledge or care.  However, as a subscribing family of the Washington Post and Amazon Prime - shouldn't he have bought our tickets?

I mean - I totally get why he couldn't afford the wine.

$54? YOU WAS ROBBED!
and dear blobby, it's harper lee, not lee harper.

Yeah - I knew that. Chalk it up to a 10 hour travel day and exhaustion. Corrected.

SMOOCH! I remember jeff daniels as the husband in "terms of endearment".

As much as I like Jeff Daniels (loved him in Arachnophobia) I really can't see him as Atticus. He's a little too bland. It would be hard to beat Gregory Peck's portrayal, though. Blobby, Blobby, Blobby, never order/buy anything without knowing the price beforehand. ASK! I'm pretty crass that way :)

I haven't read the book but I've seen the film, which has no lightness at all, so I was curious about the play.