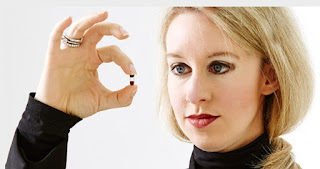 HBO's The Inventor: Out for Blood in Silicon Valley is as hypnotizing as it is fucked up.

If you haven't been reading anything about Theranos - and even if you have - you should watch this.

Elizabeth Holmes, is without a doubt, the most over confident person in the tech world - or the most delusional.  Or both.

It's not like HBO went and filmed the rise and fall of this company (oh. Spoiler Alert. It falls.)  So it recaps, but the amount of film on this woman and the amount of photo sessions she did, I'm not sure how she'd have time to invent a thing, let alone one that works.

And apparently she is (or was) convincing. Henry Kissinger, George Shultz (who takes Holmes' side over his own grandson who worked at Theranos) were advisers and investors....and suckers. David Boise, whom I admire(d), represents her and Theranos.  Well, past tense. But he went down fighting for the company until he couldn't avoid the truth.

Honestly, it is her demeanor and voice that I think lured people in. And there are accounts that this is not the way Holmes talks. I bet she's not even a real blonde.

Holmes lured folks and their cash - to a tune of $724,000,000, without ever actually making a product - successful or not. It lost just as much, if not more, with a lot going toward legal fees.

Should you have the chance, it's currently playing and on demand. And it's from the makers who did the Scientology documentary, Going Clear - which was just as creepy and mesmerizing as this is.

Song by: Suzanne Vega
Posted by Blobby at 12:16 AM

I’ll take a look. By the way are you feeling better?
JP

I ran across this while I was channel surfing. Never heard of her or Theranos (sounds like a Marvel villain). She kind of creeped me out, so I continued surfing. Cowabunga!

JP - I AM feeling better.....thanks for axing. And I lost 6lbs! I'm sure it won't stay off, but it was nice to register that on my bluetooth'd scale, so it recorded a new weight in my FitBit.

I watched this the other night on TV. Was channel surfing and got hooked.