(Reach Up for the) Sunrise 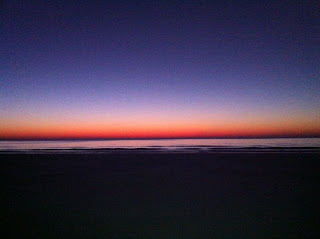 I tried to get my work peeps to go take a walk on the beach yesterday morning. They were having nothing of it.

Too bad. It was an incredible morning. Yes, the air was crisp, the sky clear, and the horizon amazing (as you can see in my above image). And yes, I was the only person on the beach. Seriously, I walked about 2.5 miles and never encountered another soul. Granted, I only walked north (well, I walked south to get back to the hotel), but maybe others were walking further south.

I had to wear a hat and gloves, but the cold wasn't really that bad - perhaps due to the hat and gloves. I hate to say it, those trips Denton and I took to Nags Head, we were too frickin' lazy to get up and see a sunrise, let alone from the beach. It is something everyone must do at least once. Honestly, I think it was better because no one was on the beach.

Twas a good thing I did yesterday. Today doesn't looks as good for the view, as it is supposed to be overcats, though I'll probably still go walk....assuming it's not raining. I can always hit the gym if I don't want to melt.

I did take an amazing 51 second video (in my opinion) of the sunrise too, but will post it when I'm home. Like the OBX, the connectivity here leaves a lot to be desired. It was iffy getting my pics transferred to post - to get a video moved and uploaded to YouTube would take an act of g-d, and Congress, (and with the House in John Boner's hands, it would be tied up in committee for the next two terms) to get completed.

You will see it sooner than later.

Here is another shot from closer to 07:00 yesterday morning. 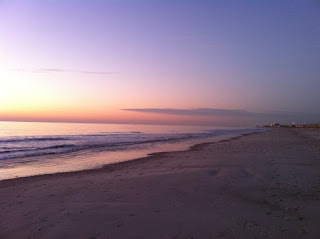 See all the non-people?

...and just for fun, this is the room next to mine. 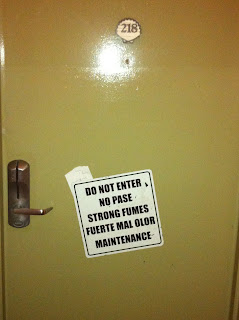 Yeah, nothing wrong with some noxious gases to roll-out the 'welcome' mat. I don't smell a thing at all, but I don't have the best sense of smell, even with this big honker on my nose. It's there for aesthetics only.

ahhhh, the joys of traveling

Song by: Duran Duran
Posted by Blobby at 5:33 AM

There's nothing like sunrise at the beach, I'm so envious as it was still dark here in Blighty at 8am, mostly due to the heavy cloud cover, I've forgotten what the sun looks like.

Wow...I thought that first picture was one you swiped of the internets. I had no idea it was 'real'. That's beauteous!!
As for the room next to yours....not so much, but I'm a bit intrigued as to what the deal is. Hmmmm....

An empty beach is a glorious rarity. I might even get up at dawn to enjoy it. And that's saying something. I'm glad I lived on the west coast of Florida, where I get the views at sunset. But everyone else does too.

I love the shades of purple.

South Beach, Fire Island, Martha's Vineyard, East Hampton and Ogunquit.
All seen at sunrise.
The question remains which were wake to view and which were up all night views?

That is a great sunrise. Glad you are finally putting your early rising to good use. Maybe you and Denton should move to lakewood and you could have that everyday. Also, I think that is the bedbug sign on the room next to yours. Be careful.

was a group trying to re-create the bean scene from "blazing saddles" in that particular room?

I used to love sunsets; as I age I grew to appreciate a sunrise. They are far more exhilarating.