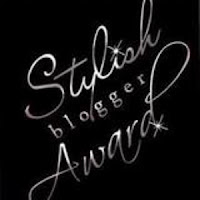 I was honored and humbled (well, as much as an egomaniac a blogger like me can be humbled) when I learned Larry from Patently Queer bestowed this prestigious award on me a few days ago. Thanks to Larry for thinking of me specially out the 10 or so bloggers worthy of this award. I accept this award with gratitude and appreciation....and for the children.

The rules for Stylish Blogger Award (yes, there are rules!) are simple:


Thank and link back to the person who awarded you this honor (check)
Share 7 things about yourself (check)
Award 15 other bloggers (reduced to 5) (check)
Contact these bloggers and tell them about the award (ehhh...probably not, but Larry did not do this part - I'm just sayin')
Here are my 7 thingies:

1. My first three cats were named 'Petunia'. Mind you, I was under 5 years old, so I'm not quite sure, but I think some may have involved untimely deaths or successful escape attempts, along with a total lack of imagination on my older sister's parts when it came to naming rights.

3. The first record I ever purchased was the Carpenters self-titled disk - or their second album. The first record I received, a year or so before, was from Gilbert O'Sullivan. I have no idea why my father would have gotten that for me. I think he must have regifted it - though I can't imagine anyone actually giving him that - even though I was in 1st grade. Songs of suicide: is that really appropriate (and not well done, at that)?

5. I haven't had a soda in almost eight years. Almost never miss it.

6. My MMPI told me I had addictive characteristics. Like I needed a psychological exam to tell me that!

7. I still want to learn how to play guitar. I don't see it really ever happening.


I didn't have criteria to pick my bloggers who may or may not pick this up. I'll list them, but I'd never really call them out to do it. If they want to - great. If not - that's fine too.

YVW Blobby. You picked some great bloggers to pass this on to.

I am unencumbered by style which makes my life much simpler.
Perhaps the GoS record was like your Gay Whisperer, you know, the catalyst that sucked you in and made you gay.

Thanks for the compliment and for thinking of me.

Good, I had nothing to write about anyway this weekend since it's going to be below zero the whole frickin time. 8 years without a soda. Even carbonated water? No tonic with that gin either? I splurge on a diet coke or perrier from time to time but that's about it.

Aww... well thank you very much (said in my best Elvis impersonation).

Were the Petunia's labeled, like Petunia, Petunia 2, and Petunia 3?

uh, this chick does not dig scars. and I have a few myself.

my first album was "rubber soul", my first 45 was "get off my cloud". I still have both.

How perfect. Today is BIlly Oceans Birthday. Now I will never forget this day.

Congratulations - I think you are justly so.

I also think a sensible man for no soda - air bag on the bones!