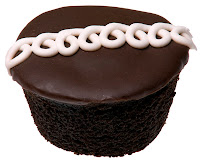 I haven't weighed in on the whole Hostess bankruptcy thing.

I love how all the news is about "twinkies".

Who gives a fuck about Twinkies?  They only Sno-balls were a worse Hostess purchase.  ...and I'm a guy who bought Fruit Pies and Suzy-Qs.

But I can't tell you how many of their signature cupcakes passed my lips. My sister and I had a good deal going.  Growing up, I didn't really want the frosting - I was happy with the cake.  She could peel that top frosting off in one felt-swoop. Of course, once I got to college, those cupcakes - avec frosting - would end up being meals.

Hell, who am I kidding - many a meal they'd become while I'm in remote areas while I work travel. It's not like they don't carry enough calories as you'd need in a regular meal.

Then of course there was that debacle of the moving Ho-Hos wrapped in paper. They totally tasted differently once they did away with the foil. Ditto with Ding Dongs.

Of course, I think the Hostess bankruptcy thing was all for PR (not Puerto Ricans). It was a way to get people to buy all that back-stock clogging the warehouses. It made them a nice chunk of change and no doubt the union thing will be fixed and that stuff will be back in every quickie-mart and gas station, not to mention college vending machines.

Works for me.  Everyone wins.

Song by: Crowded House
Posted by Blobby at 4:53 AM

Email ThisBlogThis!Share to TwitterShare to FacebookShare to Pinterest
Labels: Dessert

Who cares if these products stop being made? Lets worry about something that deserves our attention. How about fighting childhood obesity?

They're still named Ding Dongs down here in the South. The naming must be regional.

I was always a ho-ho guy, myself.