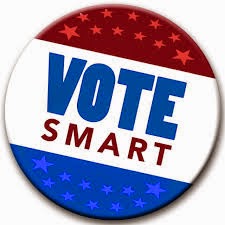 Final recap about going out to vote. Since I'm asking you to "vote smart" - hopefully you've done some research into the candidates, the issues, the repercussions of the lever you pull, the screen you touch, or the hole you punch - regardless of what or whom you vote for.

Yeah - I'm an Obama supporter (SURPRISE!), but don't listen to the things the Right says - unless you've looked into their allegations - and not via Fox "News":
That all being said - one of my peers talks about visiting his clinics in Mississippi and Louisiana. FRIGHTENING the things that come of some people's mouths. The things he says he has heard. It is amazing these people have advanced degrees, let alone clinicians who believe that people were just plopped down here 6,000 years ago as is. But it's more the B or N word they use on why not to vote for someone. It baffles me.

Ok Ok. I could go on for days. I gotta stop.

Get out there. Wait in line for as long as it takes. Good luck guys!

Song by: Michelle Shocked
Posted by Blobby at 1:26 AM