Race for the Cure 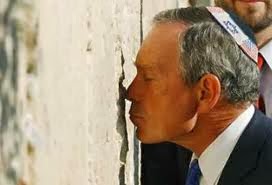 What’s with all the hubbub over a possible Bloomberg candidacy? Seriously – what? First off, I called this month’s ago in one blog entry I’d have to go back and find.
I’m all for breaking the traditional two-party system. Clearly the GOP and the DNC are not. They say, but don’t want, bipartisanism. There is no way they want tri-anything. Politics is a zero-sum game: if someone has power, it means someone has given some up. It does not bode well for these players.
Weeks ago, I signed up to be a delegate with Unity ’08. This stems from what I think is a need for a change in the system. Here is how they bill themselves:
Unity08 is a group of citizens deeply concerned about the current state of our political system. We believe that the intense partisanship in Washington and the same-old campaigns financed by big, special interest groups means that the voices of Americans like you and I are being ignored.
NPR did a story maybe six months ago stating that anyone running, who was nominated, for president would now spend a half of one billion dollars during the campaign. Imagine the ego for that shit. Imagine how much starvation one could wipe out with an election process that will last a year or two.
Anyway, back to my point. Bloomberg isn’t Perot or Nader.
Perot was just a frickin’ nut job. Albeit a rich one. And while I am not afraid of a non-politico coming in and changing the standard operating procedure, Ross was not the man. Seriously, the only thing I remember about his candidacy is Phil Hartman spoofing Perot’s running mate, Admiral James Stockdale (“Who am I?” Why am I here?”). Perot also had no chance of ruining what was to be a landslide election.
Nader, on the other hand, helped the current evil-doer in residence get elected. Twice. (Though Kerry and Gore, more or less, lost on their own merits.) Though Ralphy has little true political experience he had enough background to have been dangerous. He’s unsafe at any speed.
But Bloomberg has enough business and political experience to be a viable candidate. And he has the money. His own money. Earned, not inherited. Potentially he could fund a run all by his lonesome – and take no matching political funding. He could do this with no fundraising from the public or special interests groups.
Lobbyists, GOPers and Dems should be sharting just a little bit. Mike could and would derail any mid and low level candidates and put huge dents in some major contenders as well.
Let’s breakdown Mike’s recent background a bit:
Oh, and he currently has a 74% approval rating. Can any of the other candidates say that? Our current president can't even do half of that. I'm sorry (?) - but right now, he is my candidate of choice even if he is not a candidate.