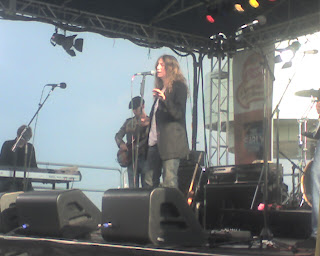 Yesterday I went down the Rock N Roll Hall O’Fame. Yes, you’ve read here before that I don’t care for the organization or execution of the Hall, but technically I didn’t go in and I certainly didn’t pay.

The CBS Morning Show (or whatever it is called) did their broadcast from there – but trust me, that was not the draw. The Friday morning concert was Patti Smith !!!! No – not Patty Smythe from Scandal (she is the Warrior – and victory is hers!). Nothing against Ms. Smith, but she’s not a huge name draw that GMA or Today Show gets. But I’m much happier with Patti than say, some crapfest like Brooks & Dunn.

I love(d) Patti Smith. Her first three albums were great and something unexpected for the late ‘70s and early ‘80s. These are the disks that really did get her inducted into the Hall this year.

I almost did not attend the show since I woke up to thunder, lightening and heavy rain. But by the time I pulled into the work parking garage, the skies had cleared and were big swaths of blue….along with some Simpsons like clouds. ‘Screw it’ I thought, and walked the three blocks to the Rock Hall.

At first I thought it might have been canceled due to weather, but as I got very close, I noticed they were set up, but not many people were there. I’m guessing less than 200. Sad.

It is safe to say that most people there showed for the cooking segment or to try to get on TV with their crappy stupid homemade signs. Sad Sad. People at work knew I was doing this and not one person knew she was – NOT ONE! I am not that old, but man – they made me feel ancient. Granted, she only had one “hit” and it was almost 30 years ago, but still…. Someone said, “oh, I think she sings commercial jingles”. I was all like, “I highly doubt that!” Sad Sad Sad.

Perhaps there was a ‘concert’ after the CBS show – but I don’t know…I do have a job. I couldn’t stick around. I stayed from about 7:30a to 8:45a and she only sang three songs – but you know how those concert series work.

There was a heck of a lot of just standing around, as if you’ve seen these things, the band usually only plays two songs…and sometimes will play others to take the show in and out of commercial break. Which songs were what, I have no idea as I didn’t see the actual show (duh!).

Patti did the Doors’ “Soul Kitchen” off her new disk of cover material, as well as the Tears for Fears’ “Everybody Wants to Rule the World”. She was in great voice and really seemed to enjoy herself. She didn’t even seem to mind doing “Because the Night” – which you just know has to become laborious after 29 years of performing it – and it’s not even her material.
Yeah – I would have liked to hear ‘Frederick’ or ‘Dancing Barefoot’ , “Rock N Roll Nigger” (as if CBS would allow that!) or even her covers of “Gloria” or “So You Wanna Be a Rock and Roll Star”.

In those 200 folks down there was my nephew, Matt. I didn’t see him, but I got back to my office and my sister left me a message he was there. I was surprised he knew how Patti Smith was – she replied he didn’t, but likes attending these type of events. Maybe he’ll get turned on to some other music – though he’s pretty good at that.

What struck me is how the different and the same we have become. There was Patti, doing what she’s been doing for the last three decades. Then there I was in my button down (I had jeans on – because it was ‘casual Friday’), working from my BlackBerry and taking pictures with my cellphone.

That I even have to use the term ‘casual Friday’ sort of made my skin crawl.
Posted by Blobby at 8:16 AM

Why do you have pix of Howard Stern for this blog?

I thought it was Robert Plant.